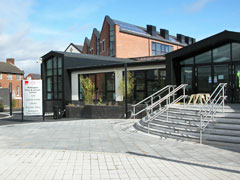 to save energy
and save on carbon emissions

In January 2009, the Telford & Wrekin Council announced its plans to regenerate the Civic Quarter of Wellington, as part of the Borough Towns Initiative programme. The redeveloped Wellington Civic & Leisure Centre opened on 12 March 2012.

The new development has been designed to provide a high quality civic building and public environment to set the tone for the regeneration for Wellington as a whole. The development creates a new pedestrian link into the centre of the town to improve the footfall into the retail area and help support Wellington’s economy.

Phase one of the regeneration consists of an £8.5million re-development of the existing leisure centre and civic offices to deliver a 3,343m extension consisting of a shared reception area with café leading to a state-of-the-art new library, two floors of offices, a new registry office as well as undertaking major refreshment of the existing swimming pool and leisure facilities.

Proposals for the regeneration were drawn up by the Council’s in-house design team (Architecture, Landscape & Building) with the style of the building being heavily influenced by stakeholders' views. The people of Wellington wished to see a building that was in-keeping with the market town environment and the Council planned to rationalise its building stock and minimise operational costs in order to offer the best long term value for money for the inhabitants of the borough of Telford & Wrekin, while ensuring high environment standards were meet and its new operational building stock achieves an EPC rating of "A".

The town centre location and the need to uses traditional values in the building terms of reference and the redevelopment of an existing site presented a number of interesting challenges.

Initially the design team planned to use a biomass boiler (a well established technology that the Council have been using elsewhere for seven years) coupled with a Termodeck system to resolve the heating and ventilation issues within the deep plan areas of the building. However, the stakeholder wishes and limited town centre space meant that servicing a biomass boiler would have been impractical in this location.

This left issues on how to achieve the Council’s environmental aspirations, without effecting the internal environment or building style, while still ensuring the solution offered the best long term value for money.

The design team discussed these issues in detail looking at the building’s orientation, material properties and internal equipment that could reduce energy needs.

The south facing facade and large roofing area encouraged the design team to consider a solar chimney to drive natural ventilation, coupled with building fabric and the use of material with high thermal mass, thin client computers and intelligent controls which dimmed lighting based on the location and the sun's position via a central system to control internal heat gains.

While the design team was investigating possible use of ground source heat pumps for space heating and solar thermal for the domestic hot water and heating the existing swimming pool the team came across ICAX and the idea of Interseasonal Heat Transfer. ICAX worked with the Council’s in house design team to save energy that would otherwise have been wasted in the summer in order to recycle it back to the building in winter.

Achieving Thermal Balance across the seasons

How has this been achieved? The design extracts “free heat” from the large areas of solar roofing on the south side of the building as well as from the solar chimney, changing room ventilation system and swimming pool ventilation system which would normally be wasted in a more traditional system. This free heat is used for domestic hot water, and heating the swimming pool with the excess heat in the summer being stored in the Thermalbank consisting of a borehole field created in front of the building.

When heating is required in winter the ICAX system extracts the stored heat from the Thermalbank using a ground source heat pump. This recycling of waste heat through the Thermalbank, allows ICAX to deliver a significantly higher Coefficient of Performance than would be achieved by running a traditional “unassisted GSHP”.

The key elements that make this system truly effective are:

1) The high level of automation with an adaptive control system that looks at the most cost effective energy source at any given time, and enables the transfer of heat from one area of the building to another.

2) Remote monitoring and management of the installation to reduce day-to-day inputs.

3) The innovate pitched roof solar thermal system which effectively and sympathetically integrates within the building design without the costs associated with traditional solar panels or the land requirement of a ground based collector which would have been difficult to incorporate in the town centre.