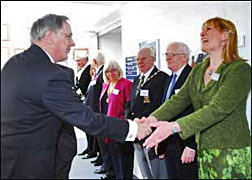 Prince Richard, the Duke of Gloucester, was given a tour of the ultra-modern Howe Dell School, on The Runway, Hatfield on Tuesday 18 March. The school has been built on the site of the de Havilland works where the Comet jet airliner was built in the 1950s.

He then proclaimed in an assembly speech to pupils, teachers and guests that Howe Dell was an example for future schools in the 21st century.

The Duke, who is 19th in line to the throne, and was also a partner in an architects practice in London for five years, visited classrooms, the outdoor facilities, the early years and children centre and spoke to many of those involved in the process of developing the school.

He then watched an impressive assembly where pupils and the school choir performed.

He responded before formally opening the school:

"Thank you very much for inviting me. I would like to say it has been a pleasure visiting Hatfield, which I have always associated with aviation. My brother and I would always search for the Comet jet, when going past on the A1, with great excitement when we were young."

"The school is the newest and best designed 21st century school”.

"It is an improvement to have an eco-school. I feel this is a better life, a life that takes waste out of the world and uses it to our benefit."

"I would like to congratulate all those in the history and in the planning and decision making that has been achieved."

"This is an occasion for everyone to remember."

Pupils moved into the purpose-built school in September from its former Tudor home in Old Rectory Drive.

Howe Dell School includes solar panels, a wind turbine, the use of recycled and locally produced materials and is the first building in the world to use Interseasonal Heat Transfer to collect solar heat from its playground, store it in thermal banks under the building for release in winter to heat the school.