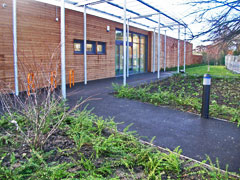 in the London Borough of Merton

When Merton Council won £1.5 million from the London Development Agency towards building the first purpose built Intergenerational Centre it relished the challenge, but faced two issues. The first was how to build to a restricted budget, and the second was how to follow its own Merton Rule and ensure the building was designed to generate at least 20% of on-site renewable energy.

Merton engaged Dean la Tourelle of Curl la Tourelle Architects to help realise their ambitions. Following time pressure and cost pressure on the building, an early decision was taken to use modular construction. The benefits of constructing the building off-site can include meeting a tight timetable, but there are some significant implications of using a building technique that involves a low thermal mass: buildings of light weight can be expensive to heat in winter and expensive to keep cool in summer because they lack thermal inertia.

Initially the architects looked to use a biomass boiler to achieve on-site renewable energy. Biomass boilers often get a big tick-in-the-box for being cheap to buy. However, two problems emerged. The first was revealed on closer examination of the life cycle costs, for, although a biomass boiler may be cheap to buy, it can be quite expensive to incorporate into an inner city site with the need to construct a store for the fuel and a segregated tarmacked space for deliveries to be made. The implications of employing someone to manage the installation for half the year were a concern.

The second problem came with the report from Halcrow Yolles, the M&E consultant, that this lightweight building would have a significant cooling need in summer. The building was due to be used not just during the day, but in the evenings too. The plan was to use it not just in the week, but at weekends as well. The passive heat gains from this high level of occupation pointed to the need for active cooling. The budget for incorporation of a biomass boiler installation for heating and a separate system for cooling pointed the budget into the red.

The architect discussed these conundrums with colleagues and experts until he found that ICAX could provide one unified system – Interseasonal Heat Transfer – to provide the heating in winter and the cooling in summer.

How can this be achieved? The ICAX design involves using Mitsubishi two pipe fan coil units to extract the heat in summer. Instead of wasting the heat from the top of the building using chillers, the design stores the heat in a Thermalbank in the ground constructed with a borehole field in the garden outside the building. Heat exchange with cold ground makes the cooling radically less expensive than trying to waste heat into the hot summer sunshine.

In winter the ICAX Skid extracts the stored heat from the Thermalbank using a ground source heat pump and returns the re-cycled summer heat back into the building. By starting with warmth from the Thermalbank, instead of cold ground, the ICAX system manages to achieve a significantly higher Coefficient of Performance from IHT than an “unassisted gshp” would have achieved.

The Interseasonal Heat Transfer approach is simple in principle but effective. It does, however, rely on very detailed thermal modelling to ensure the design achieves a balanced thermal approach so that the heat stored in the Thermalbank each summer matches the heat extracted for heating each winter. The size of the Thermalbank is critical and its design is influenced by the local geology as well as the anticipated heating and cooling loads of the building.

The Mitsubishi WR2 system designed into the building is clever enough to extract heat from high occupancy rooms on the south side of the building and transfer it to low occupancy shaded rooms on the north side. The system is alive to the changing needs of each space throughout the day. 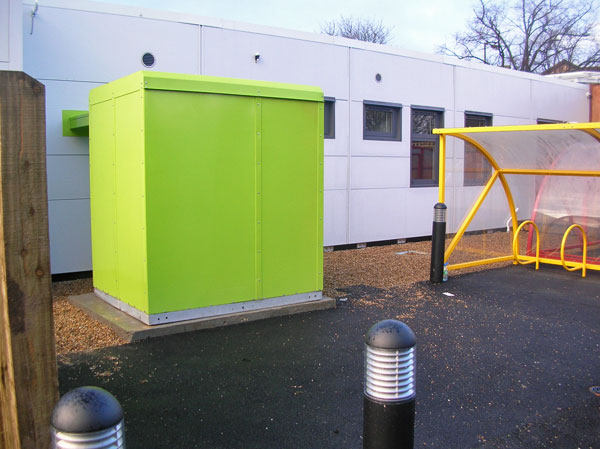 Interseasonal Heat Transfer (IHT) is controlled by an ICAX Skid

The control mechanism for the Interseasonal Heat Transfer system, which provides heating in winter, cooling in summer and domestic hot water all year round, is contained within the ICAX Skid. The Skid, which was also constructed, assembled and tested off-site, incorporates a Mitsubishi heat pump, heat exchangers, circulation pumps and electronic controls. This Evergreen Engine, which arrived on the back of a lorry, now sits beside the building and regulates the temperatures inside it. It acts silently all year round, requires a minimum of maintenance and releases no CO2 on site.

Although Merton requires all new buildings within the borough to generate at least 10% on site renewable energy to achieve planning permission – The Merton Rule – the architect aimed to achieve over 20% of renewable energy. To quote from the Curl la Tourelle website “we are always concerned about the impact that buildings have on the world's resources and work to ensure that sustainability issues inform functional, aesthetic and construction decisions". Calculations on the realised design show that the carbon offset of using Interseasonal Heat Transfer, instead of gas fired heating and standard air conditioning on a benchmark building in the consultant’s report, will be as high as 44%.

The Merton Intergenerational Centre opened its doors on 9 February 2010 and provides a meeting place for activities for all generations in the local community. The government also published its proposals for the Renewable Heat Incentive in February and, subject to the proposals passing into legislation and the building receiving the hoped for approval, Merton Council should receive a clean energy cashback of over £3,000 a year for the renewable heat generated by ground source heat pumps. Due to the efficiency of IHT this is expected to be significantly larger than the cost of electricity used to provide heating in the building.

The carbon saving of using IHT for cooling, as opposed to using standard air conditioning, is calculated at 32%. However, the Renewable Heat Incentive proposals do not currently provide cashback for renewable cooling.

The high coefficients of Performance achieved by Interseasonal Heat Transfer rely on using a ThermalBank as a heat source in winter and a heat sink in summer – and balancing the temperature needs of the building with the thermal mass of the ground. Creating the Thermalbank at Merton using Rehau PE-Xa probes involved nine 125 metre boreholes drilled by Terra Firma GI for ICAX. Drilling boreholes can be something of a black art and can lead to tales of the unexpected.

Mark Bradley of Terra Firma said, “We only had short term stability in the Thanet Sands and suffered loss of circulation in highly fractured chalk in some boreholes – perhaps due to the Wimbledon fault which runs along the road by the site. We had to monitor our drilling mud closely but only needed to install temporary casing in three boreholes albeit down to 60 metres”.

It used to be thought that renewable energy solutions were always expensive to install, even if running costs were cheaper than the traditional heating methods. Developments in ground source energy and drilling expertise mean that the capital costs have reduced, and the efficiencies have improved. These combined with the advent of Clean Energy Cashbacks mean that ground source energy is becoming the obvious choice for those who want to save money, as well as those who want to save carbon emissions with gas free heating.

Links to the parties involved:

See also: article as it appeared in GeoDrilling Internationalin April 2010.